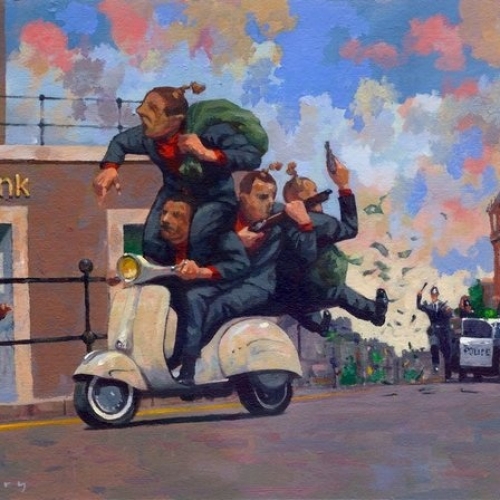 The Brentford JobAcrylics painting on Arches Watercolour Paper. A3. 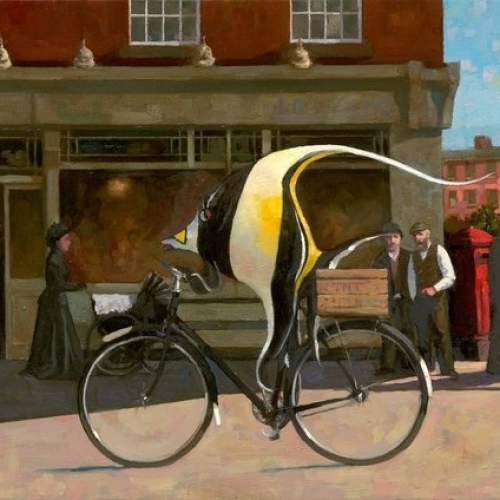 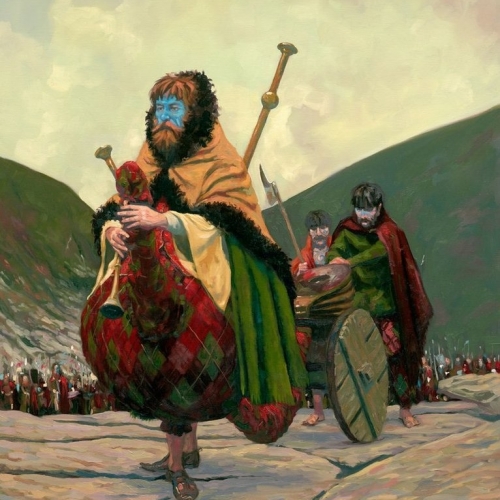 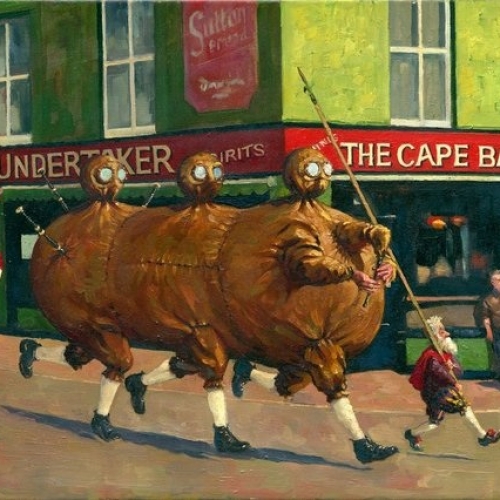 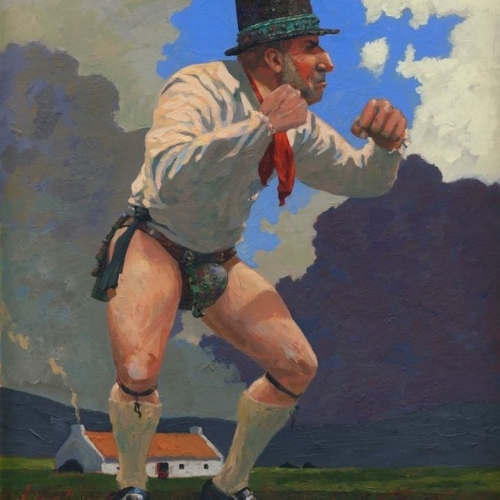 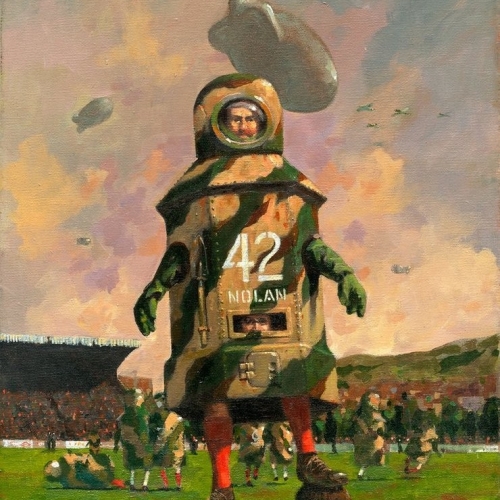 Nolan of the NinthAcrylics on stretched canvas. 16" x 20" 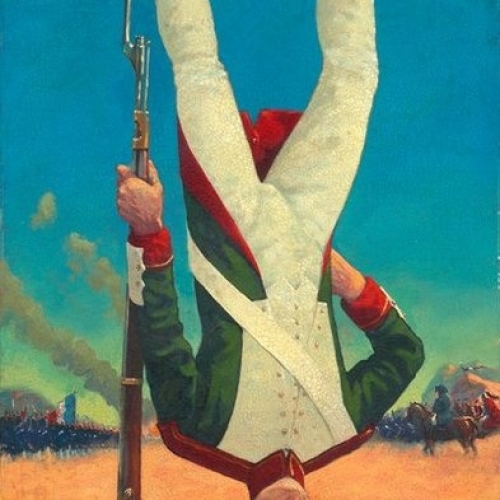 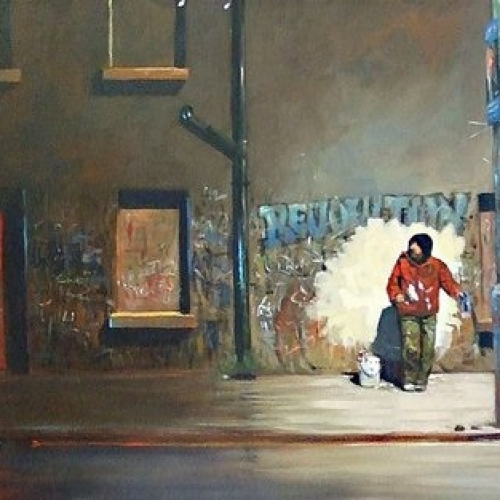 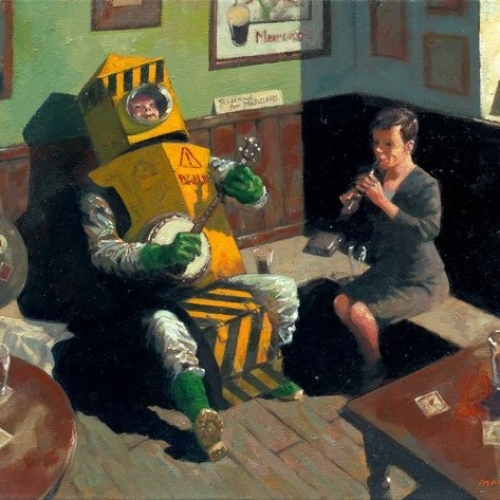 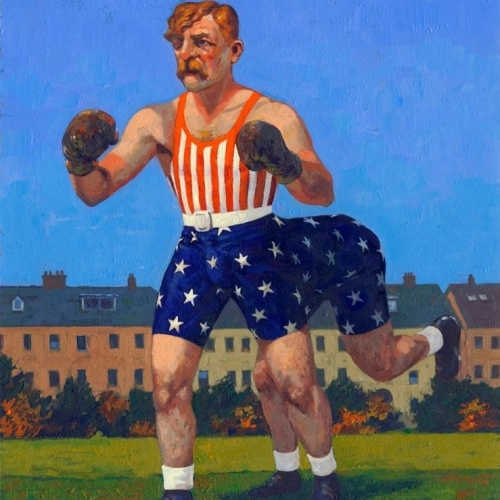 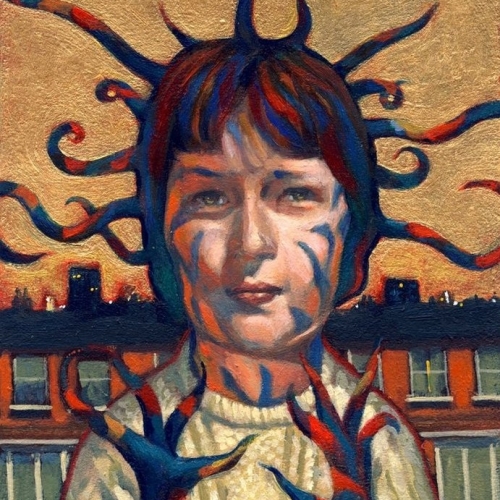 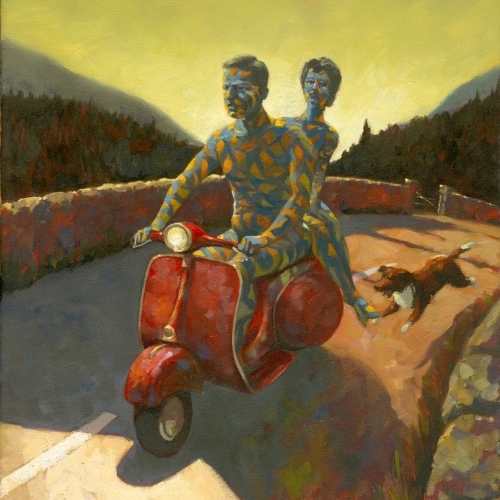 You can acquire one of these by going here.

Excerpt from The Crock of Gold by James Stephens

…After the Thin Woman of Inis Magrath had left the god she visited all the fairy forts of Kilmasheogue, and directed the Shee who lived there to be in waiting at the dawn on the summit of the mountain; consequently, when Angus and Caitilin came up the hill, they found the six clans coming to receive them, and with these were the people of the younger Shee, members of the Tuatha da Danaan, tall and beautiful men and women who had descended to the quiet underworld when the pressure of the sons of Milith forced them with their kind enchantments and invincible valour to the country of the gods.

Of those who came were Áine Ni Rógail of Cnoc Áine and Ivil of Craglea, the queens of North and South Munster, and Una the queen of Ormond; these, with their hosts, sang upon the summit of the hill welcoming the god. There came the five guardians of Ulster, the fomentors of combat:—Brier Mac Belgan of Dromona Breg, Redg Rotbill from the slopes of Magh-Itar, Tinnel the son of Boclacthna of Slieve Edlicon, Grici of Cruachan-Aigle, a goodly name, and Gulban Glas Mac Grici, whose dún is in the Ben of Gulban. These five, matchless in combat, marched up the hill with their tribes, shouting as they went. From north and south they came, and from east and west, bright and happy beings, a multitude, without fear, without distraction, so that soon the hill was gay with their voices and their noble raiment.

Among them came the people of the Lupra, the ancient Leprecauns of the world, leaping like goats among the knees of the heroes. They were headed by their king Udan Mac Audain and Beg Mac Beg his tanist, and, following behind, was Glomhar O’Glomrach of the sea, the strongest man of their people, dressed in the skin of a weasel; and there were also the chief men of that clan, well known of old, Conan Mac Rihid, Gaerku Mac Gairid, Mether Mac Mintan and Esirt Mac Beg, the son of Bueyen, born in a victory. This king was that same Udan the chief of the Lupra who had been placed under bonds to taste the porridge in the great cauldron of Emania, into which pot he fell, and was taken captive with his wife, and held for five weary years, until he surrendered that which he most valued in the world, even his boots: the people of the hills laugh still at the story, and the Leprecauns may still be mortified by it.

There came Bove Derg, the Fiery, seldom seen, and his harper the son of Trogain, whose music heals the sick and makes the sad heart merry; Rochy Mac Elathan, Dagda Mor, the Father of Stars, and his daughter from the Cave of Cruachan; Credh Mac Aedh of Raghery and Cas Corach son of the great Ollav; Mananaan Mac Lir came from his wide waters shouting louder than the wind, with his daughters Cliona and Aoife and Etain Fair-Hair; and Coll and Cecht and Mac Greina, the Plough, the Hazel, and the Sun came with their wives, whose names are not forgotten, even Banba and Fodla and Eire, names of glory. Lugh of the Long-Hand, filled with mysterious wisdom, was not absent, whose father was sadly avenged on the sons of Turann—these with their hosts.

And one came also to whom the hosts shouted with mighty love, even the Serene One, Dana, the Mother of the gods, steadfast for ever. Her breath is on the morning, her smile is summer. From her hand the birds of the air take their food. The mild ox is her friend, and the wolf trots by her friendly side; at her voice the daisy peeps from her cave and the nettle couches his lance. The rose arrays herself in innocence, scattering abroad her sweetness with the dew, and the oak tree laughs to her in the air. Thou beautiful! the lambs follow thy footsteps, they crop thy bounty in the meadows and are not thwarted: the weary men cling to thy bosom everlasting. Through thee all actions and the deeds of men, through thee all voices come to us, even the Divine Promise and the breath of the Almighty from afar laden with goodness.

With wonder, with delight, the daughter of Murrachu watched the hosting of the Shee. Sometimes her eyes were dazzled as a jewelled forehead blazed in the sun, or a shoulder-torque of broad gold flamed like a torch. On fair hair and dark the sun gleamed: white arms tossed and glanced a moment and sank and reappeared. The eyes of those who did not hesitate nor compute looked into her eyes, not appraising, not questioning, but mild and unafraid. The voices of free people spoke in her ears and the laughter of happy hearts, unthoughtful of sin or shame, released from the hard bondage of selfhood. For these people, though many, were one. Each spoke to the other as to himself, without reservation or subterfuge. They moved freely each in his personal whim, and they moved also with the unity of one being: for when they shouted to the Mother of the gods they shouted with one voice, and they bowed to her as one man bows. Through the many minds there went also one mind, correcting, commanding, so that in a moment the interchangeable and fluid became locked, and organic with a simultaneous understanding, a collective action-which was freedom…