I always try to impress on beginners that the very best way to learn to paint is by doing so from life. The uncertainty of the enterprise stops you from becoming ensnared by a pre-existing representation. That’s not to say you’ll manage to get good results straight away; it’s just that the uncertainty will provoke a more interesting and human result and you’ll learn more from the process.

Hence, last week was spent at each class demonstrating how to paint successfully from a photographic reference. I printed out some pictures I’ve taken over the years that I thought would be worth trying.

Here are the results of my own demonstrations. Each took about 30 minutes and I spent a further hour or so on the impressionist/pointillist one:

A demonstration from this morning’s art class of Alla Prima Landscape Painting from a Photo. The object is to try to have the painting look like it was done from life. So don’t get drawn into slavishly copying the photographic reference. Palette: Titanium white, Cadmium yellow pale hue, permanent rose, cobalt blue, ivory black and burnt umber for the background wash and drawing and notan. I used this demo to introduce the concept of a ‘Notan’. See the definition below from Wikipedia. I think it’s a useful technique to use, especially in en plein air painting.

This took 30 minutes but the video is compressed down to about 1m 30s.

Nōtan (濃淡) is a Japanese design concept involving the play and placement of light and dark elements as they are placed next to the other in the composition of art and imagery.

Here’s a good explanation of whites from Winsor & Newton. I especially like the sound of their Flake white (hue; which means it’s a synthetic pigment, (rather than lead oxide which is poisonous!).

I had an interesting conversation with a couple of my students the other day. At the end of the class, while all the packing up and cleaning of hands and equipment was going on, the subject of influences came up. Both of these students have been with me for a long time and they both mentioned that they liked the way I would cite my influences as I went along in the class – for example that “John Singer Sargent said this” or “I learned this from such-and-such a painter”.

However, what I was thinking when this was being said is that I don’t do it enough -and not publicly enough. So, I thought I’d better remedy that here. I’m planning a series of posts that show where I’ve picked up knowledge or where I’ve fallen into the orbit of an artist I greatly admire, whether they’re still around or not! Much the same way that an academic must cite references, although no-one has ever accused me of being academic…So here’s the first -and he’s alive and well!

I’ll spare the embarrassment by not gushing about this first painter because it’s highly possible that he’ll read this at some point. Paul Slater is an English artist who has been creating wonderful, unique work for papers such as the London Times and others too numerous to mention for a long time. His witty, surreal and beautifully rendered artworks on the food theme were a staple of the Times restaurant critic’s page for many years. I came across his work because he was invited to speak at NCAD in 2002 to illustration students and I was also there with fellow Irish illustrator Tom Byrne, representing our new illustrators’ organisation, the IGI.

It was Slater who came up with the words of advice that I’ve tried to follow, ‘Think of the most ridiculous thing you can; and paint that”. He also impressed upon students that you can’t realise your crazy ideas unless you have the craft skills to support them.

We had a conversation in the pub one day about our palettes and I mentioned that I used Ivory Black (and there are many categorical-minded people who will say the black should NEVER be on the palette). He asked me why and I told him that it’s good for making shadows from body colours and it’s a relatively weak black compared to Lamp or Mars blacks so it’s less likely to overpower mixes. I was surprised when he fished a notebook out of his breast pocket and wrote it down. And that’s one of the things that make him such a great artist; he’s supremely confident, he’s always curious and always ready to try something different in the pursuit of his art rather than defensively sticking to one way of doing things. He told me a couple of years later that he’d been using ivory black quite often. Blimey -I thought to myself, especially as I didn’t have a notebook handy.

There’s something that’s so English and early 20th century about his work. I was brought up amid this stuff and despite living the greater part of my life in Ireland, I still feel at home in his art.  I’m delighted to say I’ve got a few Paul Slater originals in my collection.

Paul is represented by the Central Illustration Agency in London and you can see more of his work on their site. 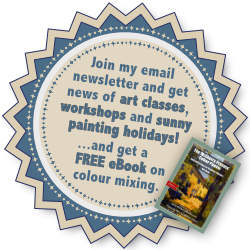