The Beauty of Dots

I have a print background -I was apprenticed in the print trade as a graphic reproducer on leaving school at sixteen years old and though I didn’t operate a print machine much (save for two terrifying days of my apprenticeship when the journeyman printer was off sick and I was asked to print a book cover. I had only been assigned to the printer for a few days and I made a terrible hash of the job. I also very nearly lost my hand in the Heidelberg Kord press when the spinning ink rollers caught my palette knife and the blade disappeared up to the hilt. I had seen the journeyman do it but at seventeen years old, I was so terrified of making a mistake and ruining an expensive press that I stupidly and naively held on to the knife. Happily, I managed to knock off the machine. Despite all that, I did attend the print college in Richmond, Surrey on a day-release basis, so I got to learn some of the hows and whys of the lithographic process if not the expertise to run a press. My knowledge is more theoretical.

What’s relevant here is that colour images are broken up into halftone dots and divided into four primary colours. Not the so-called primary colours of traditional painters but cyan, yellow and magenta with black added to provide depth to shadows. Every photograph you see in magazines is made up of a halftone matrix of tiny dots set at angles at least 15º apart. (Magenta at 45º, Cyan at 165º Black at 105º Yellow at 90º. The point is that your brain mixes the colours. Just get a strong magnifying glass and you’ll see the little rosette patterns of the colours.

I actually base my students’ palette on the four process colours although I’ve substituted more readily available ones that behave very much like the printers’ colours. I’ve thrown in an earth colour for drawing and making darker darks. I have a little ebook on my ‘McSherry Process palette’, if you want to learn about colour and simplify your palette while achieving a wide gamut of true colours.

Anyway, just lately I’ve been introducing my students to the various ways that the impressionists approached their paintings. Last week, for example, we explored the way that the Fauvists used all the ‘wrong’ colours. This week, we were looking at Georges Seurat and his pointillist approach. You could also take a look at Paul Signac and Henri-Edmond Cross. His most famous works are made up of thousands of small dabs and you mix the colours yourself as you look at them. Go close up and you can see all the tiny dots -just like a four-colour process lithographic print. Examining them closely (as closely as I can using an image downloaded from the internet), I felt that Seurat didn’t stick to a specific array of colours but did mix colours when he needed them, so perhaps they’re not truely mixed optically but I’m splitting hairs really. The point is that there’s mostly optical mixing required.

That led me to try to find out whether Seurat was influenced by the printers and new technology of his day or he sparked the idea in the print inventors. I started off down a bit of an internet rabbit-hole while looking for information and didn’t really get to the answer I was looking for. Evidently, there were many attempts to produce improved colour printing around the late nineteenth century. For example an US inventor called Frederic Ives came up with a workable process or two. What surprised me was that the four colour process using cyan, yellow, magenta and black didn’t get going until the 1940s. Before that, there were several competing processes using forms of red, green, yellow and blue. There’s a good essay, including citations, by colour scientist Brian Gamm about CMYK on the CMYK History website.

Either way, the idea that optical mixing of colour was the way to go was in the air in the latter half of the nineteenth century, which means Seurat was in there right at the start as he painted most of his pointillist (or Divisionist) paintings in the 1880s. There’s a useful paragraph about him on the Artstory.org website.

As interesting as the four-colour lithographic process is, it’s nowhere near as fascinating, joyful and downright gorgeous as painting in that style. It has the benefit of being calming; once you get going on a painting project like this, it’s almost therapeutic to apply those little dabs. Best of all, it prevents you from being dragged down the path of recreating a photographic reference if you’re using one. Your painting must necessarily be different from the reference, which is a definite win.

I managed to photograph a few of the beautiful artworks my students were doing and I’ve shown them below. 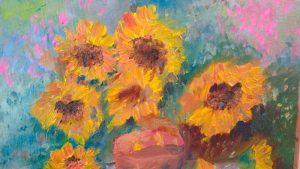 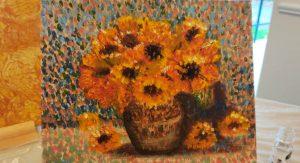 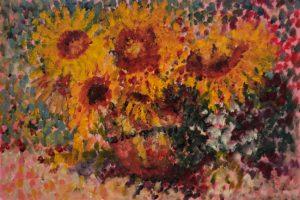 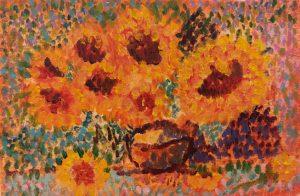 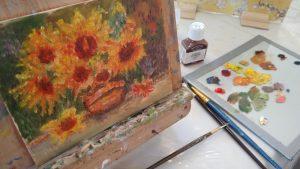 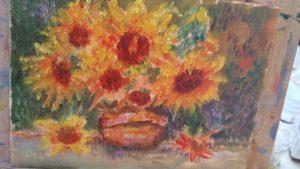 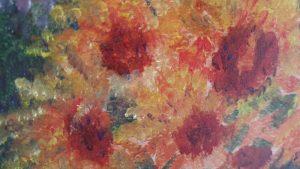 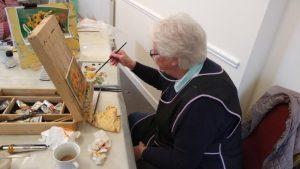 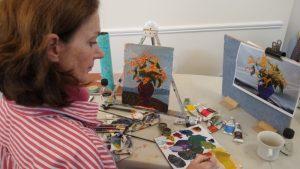 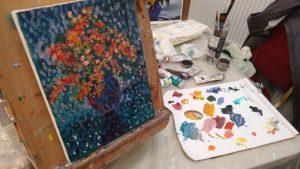 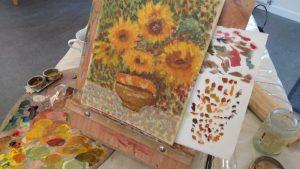